When people decide to "go on a diet", there are a number of so-called healthy foods that they typically turn to.  Some may be healthy, others simply are not.  But inevitably there are a few myths out there that just won't die, thanks in large part to clever advertising and labeling.  Heck, all food manufacturers have to do to convince people their product is healthy is to slap an "All Natural" or "Low in Fat" label on it.  Here is a short list of 5 of these "healthy" or "weight-loss" foods that dieters typically turn to and why they're not all they're cracked up to be. 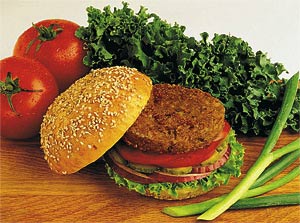 Ohhh veggie burgers... if I had a nickel for every time I've seen a health-conscious, well-intentioned dieter opt for a veggie burger instead of a real one... well I'd probably have about $10.  But that's a lot of nickels.  Veggie burgers are absolutely not a healthy alternative to beef burgers.  If you look up the ingredients of a typical veggie burger, like the Morningstar Farms Grillers Original burger, you'll learn that these things consist of largely soy and other isolated vegetable proteins.  This is a problem.  Soy is not a health food, especially when it's undergone as much processing as the soy in these burgers has.  There are too many risks of soy to fully explore here, but just to name a few...  1. Soy phytoestrogens disrupt endocrine function and have the potential to cause infertility and to promote breast cancer in adult women.  2. Soy phytoestrogens are potent antithyroid agents that cause hypothyroidism and may cause thyroid cancer.  3. In infants, consumption of soy formula has been linked to autoimmune thyroid disease.  4. Free glutamic acid or MSG, a potent neurotoxin, is formed during soy food processing and additional amounts are added to many soy foods.  Check out the Weston A. Price Foundation for more of this information.  Soy is not good for you, and veggie burgers are made up almost entirely of ingredients made in a food science lab.  Not a good choice.  Just eat a real burger.

As I've talked about in previous posts, the government began making dietary recommendations in 1977, beginning with Senator George McGovern's Dietary Goals for the United States.  The torch was then passed to the USDA in 1980, which began drafting dietary recommendations every five years.  The most recent USDA Dietary Guidelines for Americans came out at the end of 2010.  For all intents and purposes, the recommendations have changed very little since 1977.  Let's look at some of the specifics of the government's advice here, and we'll see if Americans have been following it over the past few decades.  First on the list, avoid foods high in saturated fat.  This includes eggs (which everyone has been afraid of since that Time magazine article), red meat, and full-fat dairy.  And when you cut something out of your diet, you have to replace it with something else, right?  The government advised that we eat more starches, grains, and vegetable oils in the place of these high-saturated fat foods, along with more low-fat meats like chicken and fish.  Well, it turns out that Americans have been following this advice. Here are a few graphs showing the recent dietary trends: 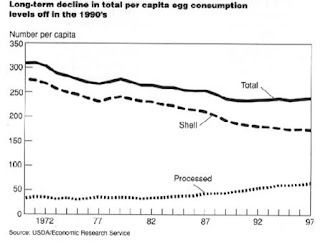 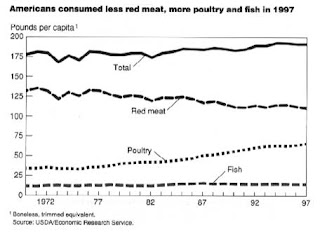 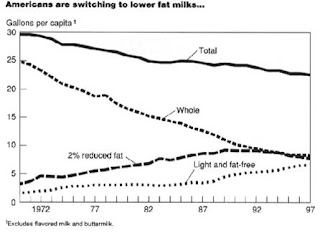 Since the 1970's, we have done exactly what was recommended for us to do.  We've eaten fewer eggs, and keep in mind also that the egg data does not take into account the countless yolks that are thrown away for fear of their artery-clogging capabilities.  Until recently, an egg white omelet was a stupid idea, and rightfully so; it tastes awful.  We've reduced red meat consumption and replaced it with chicken and fish.  Red meat has become a poster boy for our health problems, but its consumption has declined as Americans' health has deteriorated over the past few decades.  Whole milk consumption has declined immensely.  Americans drink only about 1/3 of the whole milk that they did in 1970.  It appears as though most Americans have switched over to low-fat or fat-free milk, which have both increased dramatically over the same time period.  And then we come to grains, flour, sugar, and vegetable oil.  All three of these have been on the rise in the American diet over the past few decades.  Remember, the Dietary Guidelines recommended that we increase our grain consumption, and we did just that.  Unfortunately, in our attempt to avoid animal fat, we also consumed more sugar.  Sugar was something that was not stressed in the early Dietary Guidelines, but more recently the USDA has begun to recommend reducing sugar intake.  As for vegetable oil, I could not find a graph showing its consumption, but since it didn't exist before the mid 20th century and now it's considered an essential cooking item, it's safe to assume its consumption has increased exponentially.

So... we followed the advice that was provided to us.  We ate less red meat and saturated-fat-laden foods.  We ate more grains and flour products.  We chose low-fat protein sources like skim milk and chicken breast, and we cooked with vegetable oils.  Well, here's what happened: 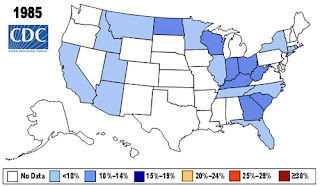 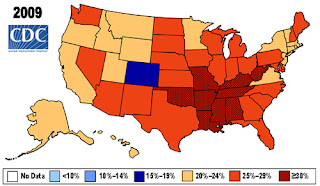 Obesity gone wild.   The first graph is from 1985, which was the first year obesity statistics by state were recorded.  In 1985, no state had an obesity rate over 14%.  Actually, data wasn't available for every state, but West Virginia, which has the highest obesity rate today, was under 14% in 1985, so chances are that was just about the highest in the country.  In 2009, only Colorado had an obesity rate under 19%, and there were 9 states with an obesity rate over 30%.  You could say, based on these numbers, that the obesity rate in America has approximately doubled since 1985, maybe even more than doubled.

But don't say it's because we're eating too much red meat and saturated fat, because we aren't.  Grains, sugar, and other carbohydrates are the foods that have been on the rise in America during this period in which obesity took off.  Besides, we have been eating red meat and saturated-fat-containing foods for millions of years.  The obesity epidemic, and the heart disease epidemic for that matter, only began in the 20th century.  As Sean Croxton of Underground Wellness always says, you can't blame new diseases on old foods.  I agree completely.  The culprits here are not red meat and eggs.  It is our overconsumption of grains, flour, sugar, and vegetable oils that is at the core of our health problems. 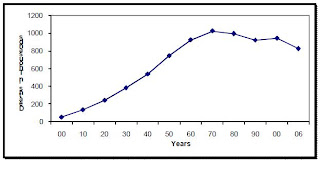 Now here we are in 2011.  The newest Dietary Guidelines have just been released, and we've still got a food pyramid that is based on a nutrient-poor food (grains) that hasn't been consumed for 99% of human history.  But what else is our government to do?  We as humans made a decision 10,000 years ago to commit to a grain-based diet when we adopted agriculture as our means for food production.  We sacrificed our health in return for the ability to support a greater population.  As a result, our modern government is obligated to support a diet that can feed the ever-increasing population; a diet based on grains that are high in calories and can be mass-produced fairly easily and inexpensively.  The USDA Dietary Guidelines will NEVER adopt a lower carb Paleo Diet mindset, regardless of how clear the science is.  Firstly, such a stark change in ideals would admit that they've been wrong for the past three decades.  Secondly, it would ruin the agricultural industry.  Thirdly, eating an optimal human diet is just not possible for everyone to do with our current population.  Like I said, we made the decision to eat a grain-based diet when we decided to adopt agriculture.

So, to conclude this six-part Historical Context series, THIS is why I reject the low-fat concept, THIS is why I think the Dietary Guidelines are ridiculous, and THIS is why I eat the way I do.  I hope my position is more clear now.  Thank you and goodnight.